WHAT IS NATIONAL INCOME? HOW IT IS CALCULATED IN INDIA

○ National Income is the net value of all the final goods and services produced by its nationals during a financial year. It is a flow concept. In India the financial year is from 1st April to 31st March. The national income is calculated annually.

○ According to National Income Committee (1949), “ A national income estimate measures the volume of commodities and service turned out during a given period counted without duplication”.

○ When NNP is calculated at factor cost (FC) it is called National Income. This measure is calculated by deducting indirect taxes and adding subsidies in NNP at Market Price (MP).

○ It is the total money value of all final goods and services produced within the geographical boundaries of the country during a given period of time.

GNP refers to the Money value of total output of production of final goods and services produced by the nationals of a country during a given period of time, generally a year.

○ The NNP at factor cost calculates national income only on the basis of cost incurred to produce the goods and services. This cost is the payment made to the factors of production.

○ The factors of production are land, labour, capitaland entrepreneur.

It is that income, which is actually obtained by the individual or nationals

In this method, the National income is compiled by calculating the gross value of final goods and services produced in a country during a year. GDP is a concept of value added. It is the sum of gross value added of all resident producer units plus that part of taxes, less subsidies, on products which is not included in the valuation of output.

In this method, the National Income is calculated by compiling income of factors of production viz., labour, land, capital and entrepreneur.

In India, a combination of production method and income method is used for estimating national income.

Estimates of National Income in India

○ In 1868, the first attempt was made by Dadabhai Naoroji in his book ‘Poverty and Un-British Rule in India’. He estimated the per capita annual income to be Rs.20.

○ The first scientific attempt to measure national income in India was made by Professor VKRV Rao in 1931- 32. He divided the Indian economy into 13 sectors.

○ In 1949, Natioanl Income Committee under the Chairmanship of Professor PC Mahalanobis was constituted. The other members being Professsor VKRV Roa and Professor DR Gadgil.

○ National Statistical Commission (NSO) was set up on 1st June, 2005, for promoting statistical network in the country. It was then headed by Professor SD Tendulkar. 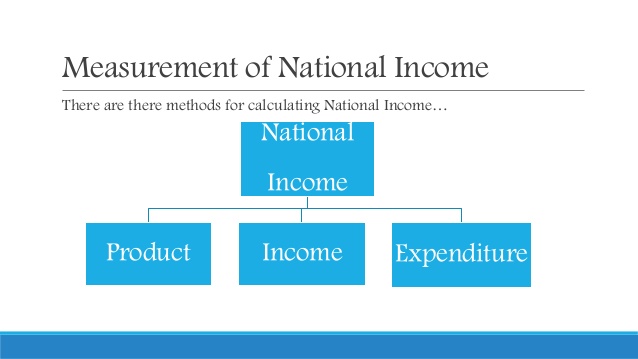 Copyright © All Rights Reseverd | Websolution by